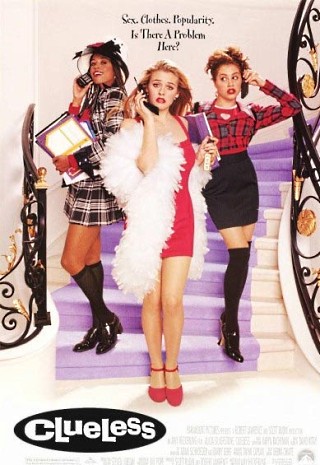 "Ugh! As if!"
— Cher Horowitz
Advertisement:

Clueless is a 1995 teen comedy of manners, written and directed by Amy Heckerling.

Loosely based on Jane Austen's Emma, Clueless is set in Beverly Hills and focuses on the spoiled and shallow, but essentially good-hearted, teenager Cher Horowitz (Alicia Silverstone) as she helps to improve the lives of everybody around her. The film contains funny, but affectionate, jabs at early '90s teen culture, high school, and Valley Girls, and introduced a fresh wave of California slang across the world. Paul Rudd, Brittany Murphy, Donald Faison, and Wallace Shawn also star.

Three YA novels (Cher Negotiates New York, An American Betty in Paris, and Achieving Personal Perfection) actually carried on the story after the movie's end; when the TV series was developed, the novels became based on the show.

Later inspired a TV adaptation that ran for three seasons (first on ABC and later on UPN) featuring much of the same cast as the film, with the notable exceptions of Silverstone (replaced in the lead by Rachel Blanchard), Murphy, and Rudd, who all went on to have successful film careers after the original was released. A second television adaptation, reportedly styled as a mystery dramedy in line with Riverdale, was announced to be in development in October 2019. It was later stated in August 2020 that the new series would air on Peacock, with a shift in perspective to that of Dionne, as she investigates the unexplained disappearance of Cher.

since 2015, while a series of graphic novels based on the film (co-written by Amber Benson), Senior Year and Our Last Summer, were released by Boom! Studios in 2017 and 2018.

"Sex. Tropes. Popularity. Is there a problem here?"

"In her world, she's an ordinary troper" - Tropes featured in the TV series include:

Cher shows Tai the ropes of high school by showing her the cliques as they walk up to the school entrance. She points out the people who run the TV station, the "Persian mafia", and the popular boys before the conversation is derailed.

Cher shows Tai the ropes of high school by showing her the cliques as they walk up to the school entrance. She points out the people who run the TV station, the "Persian mafia", and the popular boys before the conversation is derailed.