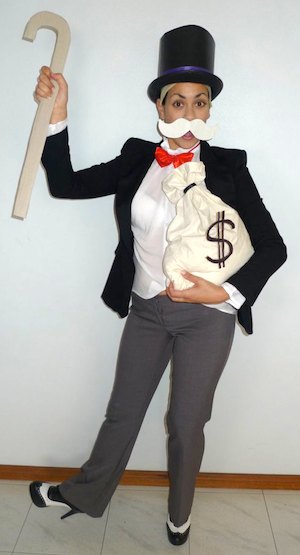 Wait a minute! Where's her monocle?
"Veblen thought and wrote this book in the United States. Between us, the phenomenon of the leisure class is more serious. Except for the very poor, every Argentine pretends to belong to that class. As a child, I have known families during the hot summer months living secretly in their own houses, to make people believe that they vacationed in a hypothetical summer village or in the city of Montevideo. One woman confided to me her intention to decorate the hall with a signed painting, certainly not by virtue of calligraphy."
— Jorge Luis Borges prologue of Thorstein Veblen's Theory Of The Leisure Class (The reader can find more about this book at Conspicuous Consumption, Real Life).
Advertisement:

A Mock Millionaire is an ordinary person who is pretending to be someone who's rich, powerful, or otherwise highly influential. Maybe he's part of The Con selling a Get-Rich-Quick Scheme, or an infatuated beau pursuing a Spoiled Sweet gal, or caught up in a Prince and Pauper or "Fawlty Towers" Plot. Whatever the reason, expect the Mock Millionaire to play the charade Up to Eleven with displays of Conspicuous Consumption, casual references to exotic places, lots of Money to Throw Away, name-dropping the rich and powerful, an Unlimited Wardrobe complete with monocle, and maybe "borrowing" a Cool Car or Big Fancy House.

Contrast with King Incognito as well as the more general Secretly Wealthy. Compare Fake Aristocrat. See also Princess for a Day and If I Were a Rich Man. Sister trope of Penny Among Diamonds.