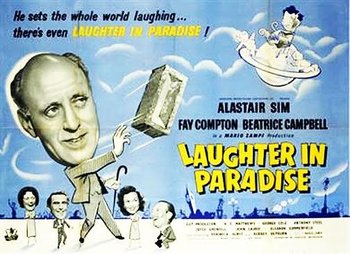 Laughter in Paradise is a British comedy film released in 1951. The film stars Alastair Sim, Fay Compton, George Cole and Guy Middleton. The film also includes an early appearance of Audrey Hepburn. The film was remade as Some Will, Some Won't (1970).

The will of well-known practical joker Henry Russell leaves a fortune of £50,000 on his death to each of his four surviving relatives, all unmarried, provided they first perform prescribed tasks that are completely contrary to their natures.

Law-abiding retired army officer Deniston Russell, who writes lurid crime novels under several fictional names, has within a week to get himself arrested and jailed for exactly 28 days. Difficult, snobbish Agnes Russell has to find employment as a domestic servant in a middle-class home, again within a week, and keep her position for a month. Simon Russell, a penniless womanising con man, has to marry the first single woman he speaks to. Timid Herbert Russell has to hold up the bank manager he works for in his office, using a mask and a toy pistol, and obtain the bank keys for two minutes.

Tropes in Laughter in Paradise: