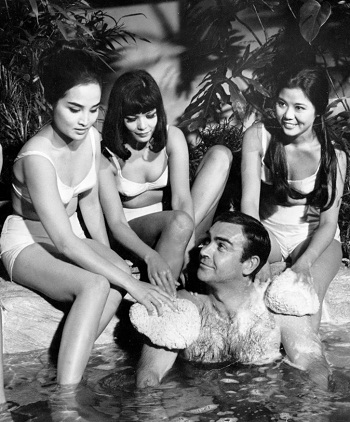 Big gun loaded and ready to fire... multiple times.
"Gentlemen, I'm sure we can sort this out amicably. Look at it this way: if you could do what I could do, you'd do it too! But you can't. I can. And I have. And I'll do it again. So you should be happy for me, just a little tiny bit, don't you think?"
— Casanova, Casanova
Advertisement:

The ladykiller, the player, the rake — a man who relentlessly pursues, lands, loves, and then abandons members of the opposite sex, a skill bestowed upon him to demonstrate just how attractive he is. Sometimes comic, sometimes sinister, always successful, this character leaves behind a string of broken hearts, and occasional vows of revenge that are rarely fulfilled. Casanova's only motivation is indulging his lust and desire, sating them with the bodies of his completely willing conquests.

Contrast with the unsuccessful Casanova Wannabe. Compare with the inexplicable Kavorka Man. A guy who gets the girls like a Casanova, albeit unintentionally, is a Chick Magnet. If kind-hearted, may overlap with Chivalrous Pervert. The Charmer is equally charming but less sex-obsessed. If they really get around but want to settle down, it's Looking for Love in All the Wrong Places. A Handsome Lech has more negative connotations and a sparser scorecard than the Casanova.

The trope is named for Giacomo Casanova (1725-1798), an Italian soldier, spy, diplomat, adventurer, and librarian whose extensive but unreliable autobiography (in which he almost literally described himself as God's Gift to Womennote "Feeling that I was born for the sex opposite of mine, I have always loved it and done all that I could to make myself loved by it.") established his eternal fame as a lover. It should be noted that the historical Casanova was closer to a Chivalrous Pervert who really was looking for love... just with women who were locked in loveless political marriages — and also achieved his successes despite being famously ugly. (Definitely

◊ he was no Heath Ledger.

◊) Interestingly, he was one of the few 18th-century men who bathed almost daily and asked the same thing from his partners (this may have aided him in his sex appeal, if most other guys stank to high heaven).

For the juvenile version — all of the above without the sex — see Kid-anova. Contrast the Serial Romeo (who falls in love with a long succession of women, one at a time and for reasonable periods). If the guy is actually only rumored to be a Casanova and has no evidence onscreen, it's the Urban Legend Love Life. If he develops feelings for one of his conquests (or someone who refuses him), he's a Ladykiller in Love. See More Friends, More Benefits for when the mechanics of a game encourage the player character to act this way. If he's malicious, he may be an Intentional Heartbreaker.

Note: It should be mentioned that even after the affairs were over, most of Casanova's ex-lovers still liked him, and he was reputedly quite the gentleman. This trope would probably fit (the fictional) Don Juan better.

Finally, a warning: Despite Maneater being a redirect, this trope should NOT be confused with I'm a Humanitarian or the Literal Maneater.

Super-Trope to Spies Are Lecherous and Really Gets Around.