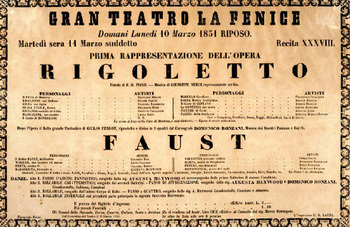 Poster advertising the premiere performance
Rigoletto (1851) is an opera by Giuseppe Verdi (based on the play Le roi s'amuse or The King Amuses Himself (1832) by Victor Hugo) about the Duke of Mantua, a Handsome Lech if ever there was one, and his hunchbacked jester Rigoletto, a Deadpan Snarker whose quips hit a little too close to home. The opera opens with the Duke plotting the seduction of a young beauty he met in church while gossips whisper that Rigoletto has found a mistress. Count Monterone, whose daughter was seduced by the Duke, comes to complain of her ruined virtue, and the Duke, on Rigoletto's blithe advice, shuts him up by having him executed. Monterone pronounces a curse on them both, and the other courtiers resolve to revenge themselves on Rigoletto for his callous jokes. On his way home from work, Rigoletto also runs into a Professional Killer, Sparafucile, who offers his services in removing anyone Rigoletto might find inconvenient. Now, finally, enter The Ingenue, The Chick and The Heart: Gilda, the woman who is simultaneously: the woman believed to be Rigoletto's mistress; the beautiful girl the Duke met at church; and, unbeknownst to everyone, Rigoletto's daughter.
Advertisement:

Well, that's all the first act. But being a tragedy, you can guess how the rest plays out.

This opera is widely-regarded as the first of the operatic masterpieces of Verdi's middle-to-late career. And despite initial problems with Austrian censors who had controlled northern Italian theatres at the time, it was a huge success at the Teatro La Fenice in Venice on March 11, 1851.

This is the source of "La Donna è Mobile

" ("Cherished Name"), two of the most famous opera tunes. Beautiful music and tragic love, what else does an opera need?