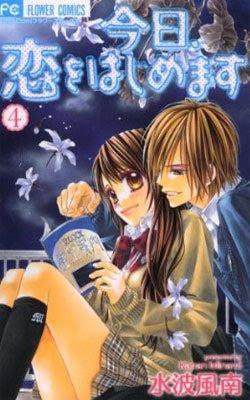 Tsubaki Hibino has a hobby: she likes styling her sister's hair. However, she doesn't think that style suits her and keeps her own hair in braids. At the start of her high school life, she's ready to find love, promising herself to become more fashionable and cute.

... Except she can't bring herself to it. On the first day in her new school, she finds herself bullied for her old-fashioned "Showa" taste in clothes. Even worse, she has to sit next to Kyota Tsubaki, resident casanova and the only one who managed to earn a higher score than her in the entrance exams. Angry at him, she cuts his long hair. This makes Kyota decide: she would be his next target. From there on, he would have her become his "woman".

Kyō, Koi o Hajimemasu, (Today, Our Love Begins, or the unofficial title proposed by Minami herself, Today, I Begin Love with Tsubaki), deals with the developing relationship between "good girl" Tsubaki Hibino and "bad boy" Kyota Tsubaki. The two start off despising each other, but quickly grow close as the series progresses. The manga is written by Kanan Minami and began serialization in Shōjo Comic in 2008. It ended in November 2011 and has been compiled in 15 volumes.

The series has been adapted in a 2-episode Original Video Animation animated by JC Staff, a Light Novel presenting the story from Kyota's perspective and a live action series taking place a year before the events of the manga. A Live-Action Adaptation film starring Emi Takei, Tori Matsuzaka and Kento Yamazaki was also released in 2012.