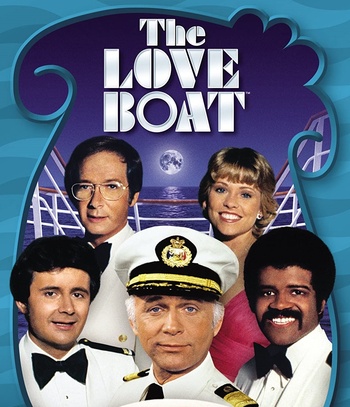 And guest starring every other actor around.
"Welcome aboard, it's loooooooooove!"
Advertisement:

Jeraldine Saunders, a real-life cruise director, wrote about her experiences in a book called The Love Boats. A trilogy of Made-for-TV Movies followed, and then it finally became an Aaron Spelling-produced series airing on ABC from 1977 to 1986.

The show was an hour long comedy, with several intertwining plots about the guests and the crew. As the title implied, people were falling in love all over the place. And, of course, went further than that.

Now, even if you never watched the show, you've probably heard the theme song

, one of the most well-known TV themes ever, and a favorite for fictional lounge acts. This was sung by Jack Jones and written by Paul Williams. Yes, the man who wrote "The Rainbow Connection" also wrote this. Ernie Anderson provided the voiceover.

The Love Boat provides examples of: