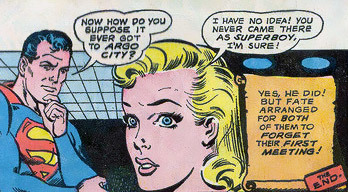 Fate... and selective amnesia, Supergirl.
"I've seen your face before, my friend
But I don't know if you know who I am ..."
— Phil Collins, "In the Air Tonight"
Advertisement:

Many years ago, Alice and Bob met each other by random chance, and the meeting left a deep impression on at least one of them. But years have passed, and now they're grown up (or at least in High School). All unknowing, they have been pulled back together by the Red String of Fate - friendship, romance and/or adventure will see them rekindle a long-lost connection long before they realize that they've met before. The realization that their new friend is the same kid they met years ago may come slowly with heavy foreshadowing, or be a sudden twist.

A classic setup for the romantic anime, when the Childhood Marriage Promise would be a bit too blatant. Quite popular in western shows as well, however.

Related to Already Met Everyone, Connected All Along, and Childhood Friends. Contrast Forgotten Friend, New Foe, Old Flame Fizzle, But for Me, It Was Tuesday.

Have We Met Before?

Starlight Glimmer bumps into Pinkie's sister Maud Pie, and realizes that the two of them have already met a long time ago.

Have We Met Before?

Starlight Glimmer bumps into Pinkie's sister Maud Pie, and realizes that the two of them have already met a long time ago.