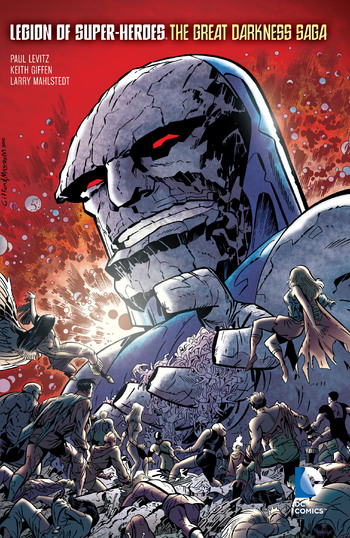 By Paul Levitz and Keith Giffen
Far across the emptiness of space, a forgotten world hurtles through the void... Burned-out, barren... And dark as the unyielding night... He waits here, gathering his power, for the moment of his triumphant return. He schemes, he plots... And builds his nightmares... His will be the Era of Darkness... And soon it will begin...
— Narrator
Advertisement:

Mystical artifacts are being stolen all across the galaxy. When the Legion is called to investigate the case, they run into powerful creatures called Servants of the Darkness. In spite of the Legion's best efforts, the Servants make off with every relic every time and hand over them to their Master, who feeds off their mystical energy to restore his own power. Finally he feels powerful enough to leave his forgotten world and prey on the living.

One after the other, the Legion's worst enemies are easily and quickly defeated by the Master of Darkness, who proceeds to add their powers to his after each battle. Meanwhile, the Legionnaires discover the disturbing fact that the Servants are twisted clones of powerful long dead beings. Whoever the Master is, he's powerful and ancient enough to get ahold of the DNA of Superman and a Guardian of the Universe two thousand years ago.

The Legion engage the Master and his Servants in Zerox, the Sorcerers' World. Although they're defeated, they have gained a key piece to defeat the Master... which is fortunate, because the Master is about to gain the means to bring the galaxy to its knees.