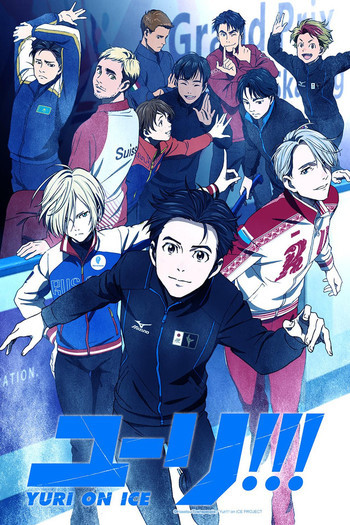 Yuri!!! on Ice is an original anime directed by Sayo Yamamoto, who previously directed Michiko & Hatchin and Lupin III: The Woman Called Fujiko Mine. It was co-created by Yamamoto with Mitsurou Kubo (creator of Again!! and Moteki), who is also responsible for the writing and original character designs. Tadashi Hiramatsu, who's best known for his work on several Studio Gainax series, serves as lead character designer.

Yuri Katsuki has always idolized famous Russian figure skater Victor Nikiforov, and dreams of one day being able to skate on the same ice as him. Unfortunately, when he finally gets his chance to do so, he messes up in his free skate, coming in dead last at the Grand Prix Final in Sochi. To add insult to injury, similarly-named Russian junior champion Yuri Plisetsky tells him to just give up already.

In March the following year he returns to his hometown in Kyushu, unsure whether or not he really wants to quit figure skating altogether. When he goes to the local skating rink and perfectly imitates Victor's latest program, a video of him is uploaded to the internet and it goes viral, catching Victor's attention. Victor then shows up at Yuri's family hot spring, declaring that he will now be Yuri's coach for the upcoming Grand Prix.

The show is animated by MAPPA and aired as part of the Fall 2016 Anime season. It is available for worldwidenote With the exception of China and Japan. streaming on Crunchyroll here

. Funimation has released an English broadcast dub for this series, which began on October 24, 2016. Watch it here

has been greenlit, called Yuri!!! on Ice the Movie: Ice Adolescence, which was originally going to be released in 2019

, but has been delayed. However, on 26 November 2020, a PV that was previously screened in Japanese cinemas has since been released to the general public

along with a notice about the delay.

Along with Tiger Mask W, it's notable for being the first TV Asahi Late-Night Anime since From the New World.

Not to be confused with the Yuri Genre; quite the opposite, in fact, given that the predominant romantic themes are between two men. (Note that the transliteration is of ユーリ , which can often be transliterated as Yuuri as well, while Yuri Genre would be written either as 百合 or, in rarely-used katakana, ユリ.) This has led to some fans joking that it ought to be named "Yaoi!!! On Ice", instead, though it isn't strictly Yaoi Genre, either, despite its gay themes.

Yuri is eerily calm as Victor cries from the most devastating news.

Yuri is eerily calm as Victor cries from the most devastating news.