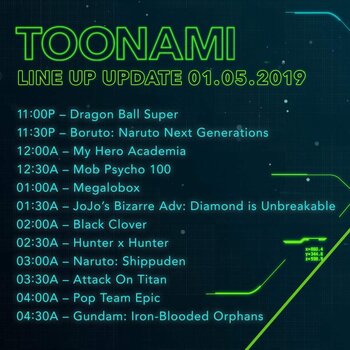 Anime aired from around 11 p.m. until the wee hours of the morning, occasionally indicated by the odd-looking "22:00-27:00" notation. They are almost universally watched by older teens and young adults.
Advertisement:

This is common in Japan for several reasons, even if it seems like a weird time to broadcast a show that's trying to make money.

The trope name refers to the odd way of noting when the shows start airing; it's common to see a show aired at 1:00 am listed at "25:00". This is largely done to align the schedule with that of the previous day; many Japanese TV networks still sign off in the middle of the night, and those who don't will only switch to "the next day"'s programming at 4 am or so.

open/close all folders
Japan
Other
In-Universe