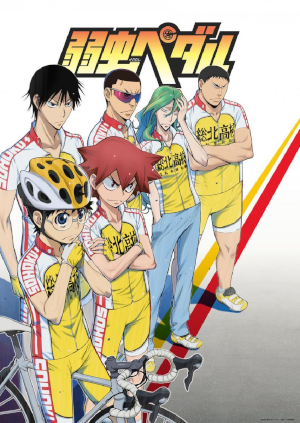 "I'd never join a sports club even if they asked me to."
— Sakamichi Onoda, our protagonist.
Advertisement:

Sakamichi Onoda is your everyday teenage otaku just starting high school. Having hidden his otaku tendencies while he was in middle school, he dreams of joining this school’s anime club in order to indulge in his passions. And hey, if he can make some friends on the side, that’ll be a bonus!

...Unfortunately, his hopes are crushed when he finds out the club has closed due to a lack of members. Though this doesn’t deter him for long, and he soon sets out to gather enough people to restart it.

Meanwhile, two talented road cyclists are also entering the same school. For Shunsuke Imaizumi and Shoukichi Naruko, bicycle racing is very much Serious Business. In fact, their goal for the upcoming year is to reach the Road Race Interhigh, and rob the victory podium blind.

The paths of these three intersect after Imaizumi and Naruko run into Onoda making his weekly commute to the otaku capital of Akihabara, a whopping 90 km note 55 miles! round trip on some of the steepest slopes around... on nothing but a beat up mommy-bike. Recognizing his incredible potential for road racing, the duo attempt to corral Onoda into abandoning his beloved anime club in favor of the bicycle racing club, much to the latter’s horror.

And thus begins Yowamushi Pedal ("The Weakling's Pedal"), a manga by Watanabe Wataru, published in Weekly Shonen Champion since 2008. A TMS Entertainment-produced anime was released as part of the Fall 2013 lineup, follow by a second season called Grande Road in 2014, a third season called New Generation in 2017, and a fourth called Glory Line in 2018.

were released in Japan in August 2015.