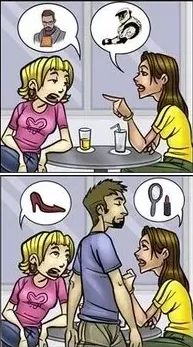 What Montgomery said next was unimportant. She could have called him a "tin-plated dictator with delusions of godhood!" She could have gone with the classic "scruffy-looking nerf-herder!" She might have chosen, appropriate to the situation, "gods-cursed TOASTER frakker!"
But in the end, it was unimportant what exactly she said.
Because the entire population of Springfield High heard Montgomery use an insult so geeky, so extreme, that there was no doubt in any other stealth geek's mind what she was.
One of them.
— Geektastic: Stories from the Nerd Herd, "One of Us"
Advertisement:

This trope defines a character who is interested in fantasy, sci-fi, computer stuff or other manner of geeky pastimes. The difference between this character and a proud geek is their total lack of embracing their geeky nature. To a vast majority of the population, they would never guess their geeky nature.

Reasons for covering up their geekiness may stem from a perceived image of themselves they desire to maintain or running with a group of friends who aren't normally interested in that kind of stuff. Expect Freudian Slips when their topics of interest are discussed, and cries of ...Or So I Heard in a vain attempt to cover it up.

Contrast Extraverted Nerd who is loud about their nerdy interests and may lack the self-awareness of their behavior to even consider being ashamed of it. See also Public Hater, Private Fan which can overlap with this.

as "a dumb nerd who for several of my preteen years secretly ran a fanfiction blog dedicated to Kit Fisto."