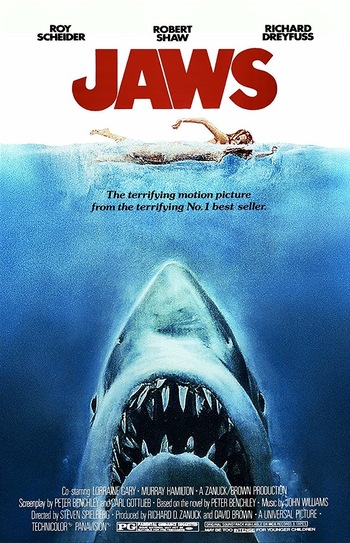 Wait, it was a book?
"There is a creature alive today that has survived millions of years of evolution, without change, without passion, and without logic. It lives to kill; a mindless, eating machine. It will attack and devour anything. It is as if God created the devil and gave him... jaws."
— From the trailer
Advertisement:

Released in June 1975, Jaws was Hollywood's first Summer Blockbuster, soon to be codified by Star Wars, and a launchpad for the career of its director, Steven Spielberg. Along with Godzilla (1954) and King Kong (1933), it also served as a key inspiration for giant animal rampage movies.

As the level of terror in the tourist-economy town of Amity — and in the audience — gradually grows to a fever pitch, the shark continues with its attacks, eventually forcing Brody, Hooper and Quint to spend the last third of the film completely isolated at sea, hunting the monstrous creature.

The film was adapted from the 1974 novel of the same name by Peter Benchley, which it has dwarfed astronomically in terms of public recognition. The novel was inspired partly by real shark attacks and partly by Moby-Dick, with Quint's dogged pursuit of the shark sharing many similarities with Captain Ahab's hunt of the great white whale.

Jaws had such a profound impact on the public that beach attendance dropped sharply the summer it was released — it has been said that it filled the cinemas and emptied the beaches.

The film was followed by three sequels:

It also spawned plenty of merchandise, including trading cards, toys, and four licensed games; Jaws for the NES, Jaws: The Computer Game for Commodore 64, Jaws Unleashed for PS2 and Xbox, and Jaws: Ultimate Predator for Wii and Nintendo 3DS. The Universal Studios Theme Parks also had many Jaws-inspired rides (though the one in Orlando was deactivated to expand the Harry Potter area). A musical based around the making of the film

, titled Bruce is also in the works.

Although Scheider, Shaw, and Dreyfuss got top billing, the true star of the movie was a mechanical shark named Bruce, not Jaws!

"You're gonna need a bigger trope":

Brody: I used to hate the water.
Hooper: Heh. I can't imagine why.
Feedback

The original scene that started the trope in Jaws.

The original scene that started the trope in Jaws.