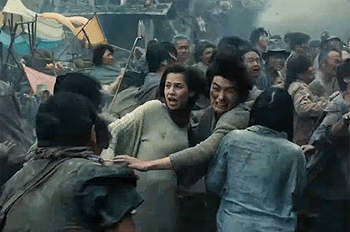 Often seen in natural Disaster Movies and works with apocalyptic settings, it's when a group of people starts running and screaming in panic during a life-or-death situation, be it a giant monster, a terrorist attack, or a tsunami, whatever the threat may be, it will cause absolute pandemonium, no, not that one, the other one that means chaos.

It's a stock reaction usually Played for Drama, but it's also Truth in Television as it reflects human behavior during times of disasters and fear.

Expect to see someone in the crowd to trip or get stuck and delay the others, or a shot of a lost kid looking for their mother. "Hurry up!" and "Don't push!" are common phrases that get yelled out in these tense moments, and as people just want to escape unharmed as quickly as possible, they typically act on autopilot. In animated works, this is usually accompanied by a visual effect to indicate rapid movement (with still images for added drama).

When the Living Prop folks do it, and they end up dying amid the mayhem, then they are Red Shirts, but if others besides the living props do it, then it's a Mass "Oh, Crap!", and if they die, as well, it means that Anyone Can Die. May involve Deadline News.