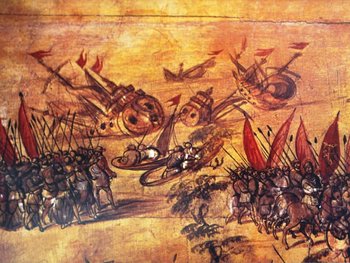 Hernan Cortes scuttling his fleet off the Veracruz coast. Attributed to Miguel Gonzalez
"He burned all the ships on which he had come there, because he believed his men would not be so quick to flee if there was no way of getting away from there."
— The Tale of Styrbjörn
Advertisement:

"Burning the/your ships/boats" means doing something that makes it impossible for yourself to turn back, especially if it is done willfully and without necessity. The figure of speech derives from legends about conquerors who supposedly, upon landing their army in enemy country, ordered the invasion fleet to be burnt. Most people today have heard this tale about Hernán Cortés doing it during the Spanish Conquest of the Aztec Empire, but it is in fact centuries older than him.

The assumed benefit of such an act is that everyone on the team — whether it be an actual army intent on conquest, or any party pursuing a risky undertaking will show maximum commitment if they know that retreat is impossible. There isn't any use in holding back or playing it safe when there is no exit option to fall back on. Desertion or mutiny is futile if there is no hope of escape. Dissenters are silenced when there are no choices left to argue over, and everyone's best hope of survival lies in cooperating for the common success. Once the Ships are Burnt, it's do or die for everyone — succeed, or face death or captivity.

Or that is the theory. While tales of this type are a favorite of motivational trainers, who always focus on how "cutting off your retreat" will set free unknown potentials, there are only few historical examples of things like this actually happening, and then usually not for the exact same reasons. Also contrary to what motivational trainers like to suggest, it is not actually a guarantee of success.

Depending on the situation and the kind of enterprise at hand, there are many ways of Burning the Ships:

An act like this can be unilaterally ordered by a leader, or agreed on as a collective decision. But it always hints at internal conflicts within the party that is thus committed to a common goal: Usually it is done precisely because the initiatiors of a Ship Burning do not trust in the loyalty or the morale of the rest of the group in the face of danger. Objecting to a Ship Burning is hard, as it may lead to being branded a coward or even traitor. Burning the Ships may be nothing less than a stratagem to coerce the group into a course of action they would not have chosen from their free will.

Characters who order or initiate a Ship Burning are always reckless and uncompromising, and often morally ambivalent: Shining heroes do not need to force their followers to fight, or put the lives of their companions at unnecessary risks; on the other hand, even bad guys can earn some respect from the audience if they show they have no backup plan in the case of defeat. Characters who Burn the Ships are often Anti-Heroes, Anti-Villains, or Villain Protagonists.

This trope often leads up to a Big Badass Battle Sequence, which will more than likely end in a Last Stand.

Compare Cornered Rattlesnake, which is non-voluntary. Contrast Let the Past Burn, which is mostly a symbolic action on an individual scale. An employee quitting a job in a way that makes sure they can't ever go back again is Take This Job and Shove It. Throw the Sheath Away and The Gloves Come Off are distant relatives.

Not to be confused with Sink the Lifeboats (that is, Burning Their Ships), which is about preventing your enemies from escaping so you can exterminate every last one of them. If you were thinking about burning pairings, see Ship Sinking. It is also certainly not the same as a Viking Funeral, although they do both involve burning a boat.

In "F Sharp" from "Yellowjackets," Misty Quigley is gratified at hearing her fellow crash survivors' praising her skills, feeling wanted in a way she never has before. So gratified that she sabotages the plane's flight recorder, first attempting to smash it and then pulling out the wires. Seeing the results of her handiwork, she smiles. This results in them being stranded for 19 months and only five of the 17 survivors (that we know of) surviving the experience to be around during the events depicted 25 years later.

Alternative Title(s): Burning The Boats, Comfort Place No More, Destroying Your Means Of Retreat, Burning Your Boats, Burning The Bridges

In "F Sharp" from "Yellowjackets," Misty Quigley is gratified at hearing her fellow crash survivors' praising her skills, feeling wanted in a way she never has before. So gratified that she sabotages the plane's flight recorder, first attempting to smash it and then pulling out the wires. Seeing the results of her handiwork, she smiles. This results in them being stranded for 19 months and only five of the 17 survivors (that we know of) surviving the experience to be around during the events depicted 25 years later.