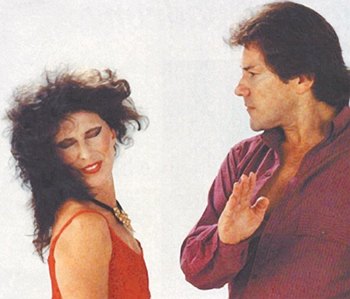 That one slap.
Advertisement:

When somebody wants to humiliate or show someone else who's the boss, they give them a bitch slap. Someone being cheeky? Slap! A snarker failed to sneak a jab past their target? Slap! Someone is pissed and wants total ownage of their enemy? Slap! A villain is gloating and sending him a message with a fist is too unsophisticated? SLAP!!! As one can tell, this is the one slap that people do not want to be on the receiving end of, because it hurts their ego/feelings far more than anything. Most of the time it's done with the palm of one's hand, but it can also be done with the back of one's hand (which is called a "pimp slap").

This is often a favorite move done by villains and cocky fighters to disgrace others. It gets less awesome and more creepy if the villain does it to a bound victim, especially if there are sexual undertones. On the flipside, The Hero will most likely deliver one if they are royally pissed and want to bring the villain or resident Jerkass down a notch. Trolls and other pranksters will just do it for shits 'n giggles.

More often than not, however, this is Played for Drama. Usually one of the characters is way more powerful than the other; not in terms of superpowers or physical strength but in actual power (a top politician, businessman, crime lord, parent, etc.), and the slap highlights it. Either of the characters is speaking ill, or perhaps even insulting, the other, and then the slap silences the speech. For at least a moment, everyone will be shocked and fall into Stunned Silence. If there was a soundtrack, it will halt as well. The meaning depends of the power comparison: if the slap is made by the weaker character it works like a Defiant Stone Throw; if it is made by the stronger one it works like a Kick the Dog moment.

Expect a lot of hype when someone successfully pulls it off at the right moment. Even more so if a weaker person managed to bitch-slap someone who is above them in terms of power as they just slapped Cthulhu in the face, regardless if they live to tell the tale or not. But on the other hand, it can be an utterly disrespectful move when it's done to the undeserving as it's a degrading action.

Compare Armor-Piercing Slap when someone who is far weaker managed to turn the head of a superhuman. Compare/Contrast to Dope Slap when the victim is being a moron, ditz or just plain silly and gets a slap to the back of the head to reel them in, and Zen Slap, when a Zen master does this to their disciple for the purpose of enlightening them. Compare Get a Hold of Yourself, Man!, when the slap is used to put an halt to some chaotic behavior.