Breach of Promise of Marriage 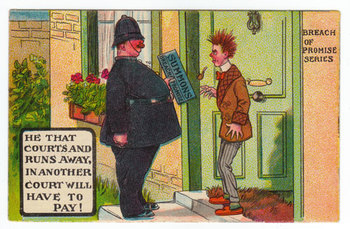 The legal doctrine that a man engaged to a woman (assuming he could lawfully marry her, of course) has made a legally binding commitment to marry her and is liable for damages if he backs out. By the way, the principle worked in reverse as well, though it seems that, generally, it was the man who tried to get out of it. Although the doctrine has existed since at least the Middle Ages, it is best known for its applications during the Victorian era, due to being a staple plot device for 19th Century comedy writers.

In Victorian times, it was common for engaged women to lose their virginity during the engagement period, which of course meant that "seduce and abandon" incidents were also common. (Such women would be considered Defiled Forever, which could, at that time, jeopardize both their marriageability and, since women were typically dependent economically on their husbands, their futures.) To discourage such duplicity, a woman so victimized could sue for damages. Generally speaking, the woman was free to break the engagement without legal repercussions in most cases, since men had the opportunity to earn a living (and were not held to being virgins upon marriage), and thus being jilted did not affect a man's social and economic standing in the way it affected a woman's. A man could sue for damages if a dowry had already been paid.

This is largely a Forgotten Trope, and normally appears only in older works and period pieces. As virginity became less important to a woman's marriageability and marriageability became less important to a woman's future, the notion of Breach of Promise as an actionable tort was undermined and eventually abolished around the middle of the 20th Century. Of course, that's not to say that the woman's family might not resort to extralegal means to enforce the promise. Additionally, someone who has taken action in reliance on the promise of marriage (e.g. quitting a job or breaking a lease or selling a house) to their ultimate detriment may be able to recover damages under the modern doctrine of promissory estoppel

Breach of Promise may also appear in fantasy or speculative fiction settings, especially in depictions of pre-industrial societies.

The modern descendant of this trope is the woman keeping the engagement ring if the man breaks off the engagement, the implication being that a woman's virginity is worth the price of a ring, though the law on that is more complicated (and varies by jurisdiction besides).note A common approach is that an engagement ring is an absolute gift, which the man gives the woman, rather than a conditional gift. There have been numerous cases on this, with different jurisdictions taking different sides on the issue. Returning the Wedding Ring is when this is averted and the return of the ring is done through the narrative to show the end of the relationship.

Compare Arranged Marriage, where the promise is made by third parties (usually parents) and any legal action would be brought against one or more of the arrangers, not against the prospective bride or groom. May overlap with Runaway Fiancé, where the man simply flees to avoid his obligation without bothering to tell his betrothed that the wedding is off, or Runaway Groom, where he flees on the wedding day. It could also involve a Child Marriage Veto.