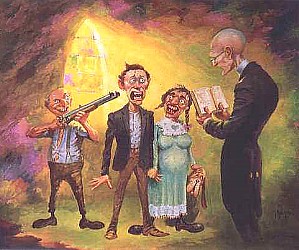 Oh my sweet Lord, What Were You Thinking?!?!
"I wanted to marry her when I saw the moonlight shining... off the barrel of her father's shotgun!"
— Ali Hakim, Oklahoma!
Advertisement:

Uh-oh. Did you just have a one-night stand with the Farmer's Daughter? Whoops, didn't quite turn out like you figured, eh? Her old man found out, and now you and Daisy Mae are standing before an altar in a rural church, with your petulant in-laws pointing a nice long (and loaded) shotgun at your back. There's no escape. No Big Damn Heroes are going to rush in and rescue you in a dramatic overblown fashion. You've made this bed and now you're going to lie in it. For the rest of your life.

Oh well, at least Daisy Mae is somewhat pretty... for a girl with only one tooth.

The traditional Shotgun Wedding (replete with gun-toting relatives) is a common staple of comedies set in rural, "hillbilly" areas. Any big-city fellers who wander into such areas had best be discreet about any "minglin'" they do with the local womenfolk, lest they find themselves being forced to stay a lot longer than they had intended. And God help them if the farmer's daughter suddenly gets knocked up in that one-night stand. They may be shot before they get dragged to the altar. Female main characters must also take care when journeying into these kinds of areas, lest an affair forces them to stay as well.

Sometimes mutual attraction isn't even required before our hero or heroine winds up frog-marched to the chapel. One of the local boys or girls may take a shine to a traveling protagonist and attempt a forced marriage at gunpoint. In cases like these, the Big Damn Heroes are much more likely to jump in and save the day. But if you got into this situation by sowing your wild oats a little too freely, then you're pretty much on your own.

Nowadays, a "shotgun wedding" seldom involves actual firearms; the phrase is a euphemistic way to refer to any marriage that occurs upon learning that the bride is pregnant. (When characters in older media talk about "having" to get married, this is what they mean.) The parents may not be incensed nor the prospective groom unwilling, but there is still a sense of compulsion involved, since the couple may not have married so soon — or at all — if not for the unexpected pregnancy. In fact, if an actual shotgun is involved, the unwilling groom can have the marriage annulled by reason of duress (because "they had a gun to my head" is the textbook definition of duress). In fact, in the Catholic Church, a six-to-nine-month preparation program called Pre-Cana is required of any who seek marriage, with one of the stated goals being to weed out such shotgun marriages. Coercive weddings are further forbidden in Canon Law.

This kind of activity was a lot more common back when there was more of a stigma attached to unwed parents, especially a single mother. The biggest reason for these marriages was to preserve her virtue.note It's also, unsurprisingly, Older Than Shotguns, and used to be known as a "knobstick" wedding. But in this day and age, single moms are viewed more sympathetically and it's the father who's judged as an irresponsible cad if he knocks a girl up then ditches her. However, he can remain in good graces without marrying her if he's an active co-parent, and most people today agree that it's better for all involved that the parents not marry if they're only in it for the kids and not their own relationship. However, this trope is still Truth in Television for more socially conservative parts of the world.

If the wedding effectively happened when the groom (or bride) wasn't looking, it's an Accidental Marriage.

This is a subtrope of Altar the Speed and also of Honorable Marriage Proposal. May end in Babies Ever After and can lead to the couple later believing they Married Too Young. Invoking this trope is usually the purpose of The Baby Trap (and frequently, by extension, a Fake Pregnancy). Also compare and contrast Captive Date, where one side of a romantic evening would rather not be there, but isn't allowed to leave. An inversion of this is Break Up Demand.

"Marrying the girl you knocked up":

“All right, here we go. Baked Bean, do you take this mare to be your lawfully wedded wife, even though you really don’t have a say in the matter?”
“I guess I do.”
“Smart move. Celestia, Princess of the Sun, do you take this stallion to be your lawfully wedded husband since you got all nosey with him?”
“Loving every moment of this, aren't you?” Celestia darkly replied, and Luna nodded vigorously and with a huge smile. “Yes. I do.”