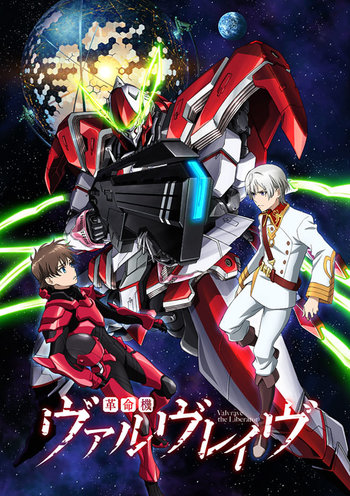 "Do you resign as a human being?"
Advertisement:

Valvrave the Liberator, or in Japanese called Kakumeiki Valvrave, is a mecha anime series produced by Sunrise, with Kou Matsuo as the director, Katsura Hoshino on the original character designs and Ichiro Okouchi as writer. It aired on April 12, 2013, with 12 episodes. Season 2 began airing on October 10, 2013.

Crunchyroll is streaming both seasons on their site here.

Viewers living in the US, Canada, United Kingdom, and Ireland may watch it legally there.

In the year T. C. 71 (True Calendar), seventy percent of mankind now lives in space, in space colonies called Dyson Spheres. Two distinctive space nations emerged, the Dorssian Military Federation and ARUS, the Atlantic Ring United States. Haruto Tokishima lives an ordinary yet content life in the neutral nation of JIOR with his friends and his crush Shouko. However, when the Dorssians attack, an untimely tragedy causes Haruto to swear revenge...

Coincidentally, a mysterious mecha called the Valvrave springs up from underneath the school with an open cockpit. As you'd expect, Haruto leaps into the mecha with the intent on wiping out the enemies attacking his home. Before he can activate it, though, it presents him with a single question: "Do you resign as a human being?"

Valvrave the Liberator contains the tropes of:

"Do you believe in human beings?"