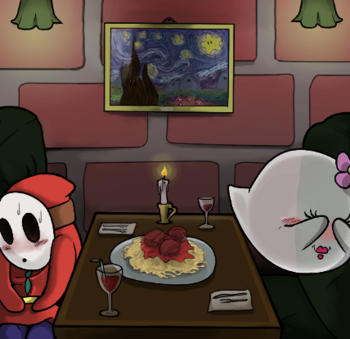 The Big Date, by TricksyWizard

"Okay! What is wrong with the two of you?! Seriously! He likes you, and you like him, and just be together! Jeez, Louise! Happiness is not that difficult!"
— Lily Aldrin, How I Met Your Mother
Advertisement:

When two characters are attracted to one another but are both so incredibly shy and awkward that neither one of them has the guts to do anything about it. In the end, all it usually takes is for someone (or something) else to give them a gentle nudge in the right direction and they'll get together.

The pair usually comprises a regular character and a Temporary Love Interest, but it can also be a Beta Couple with a Will They or Won't They? plot of their own. It may also involve some Dramatic Irony if the audience is made aware of the pair's mutual crush before they are. See also Everyone Can See It.

Subtrope of Birds of a Feather. Compare with Belligerent Sexual Tension which also has trouble getting together, but for different reasons. May be a driving force behind Will They or Won't They?, Not to Be Confused with The First Cut Is the Deepest, a trope also described as "once bitten, twice shy."