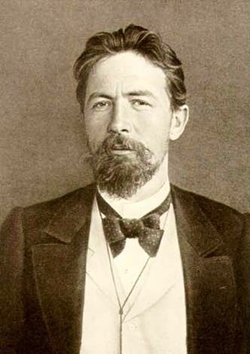 "If in the first act you have hung a rifle on the wall, then in the following one it should be fired. Otherwise don't put it there."

Anton Pavlovich Chekhov (Russian: Анто́н Па́влович Че́хов; 29 January 1860 – 15 July 1904) was a Russian short-story writer, playwright and physician in the turn of the previous century. He's best known for his dramatic works, and especially his four major plays: The Seagull, Three Sisters, Uncle Vanya and The Cherry Orchard. His plays seem to be nearly-plotless character studies. Although they're often about how depressed people are with the lives they lead, Chekhov referred to his plays as Comedies (aside from Three Sisters). His main objective with his work was to get people to see the pain in their lives and make a change. He worked as a doctor most of his life, and there are many doctors as characters in his work. His plays were not well-received initially, and he almost gave up writing after the first production of The Seagull was a bomb... and then it was revived four years later by the Moscow Art Theater and was a huge smash hit.

He had some of the greatest last words ever: "It has been a long time since I tasted champagne," right after his last sip.

He is strongly associated with Stanislavski (the father of Method acting), who considered himself the expert on Chekhov's plays. Chekhov disagreed, as Stanislavski insisted on playing Chekhov's comedies completely straight.

At the age of 20, he wrote a short story called "What's Most Commonly Found In Novels, Novellas etc.". That's right, the guy created a short prototype for This Very Wiki!

He is also the Trope Namer for the ubiquitous-on-this-site Chekhov's Gun.

Works by Anton Chekhov with their own page on the wiki:

Other works by Anton Chekov contain examples of: