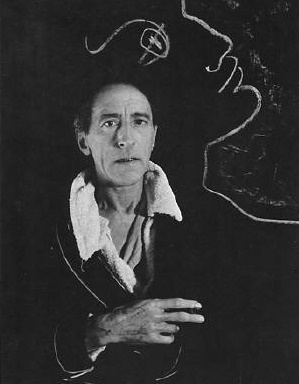 Jean Maurice Eugène Clément Cocteau (5 July 1889 – 11 October 1963) was a one-of-a-kind multi-talented French artist — novelist, poet, playwright, theatre director, filmmaker, actor, designer, graphist, ceramicist, stained glass maker and whatnot. He was also a talent manager. Very much a Renaissance Man, he considered himself as a poet above all.

He first gained prominence in the Parisian Avant-Garde art circles in the 1910s, along with writers such as Guillaume Apollinaire and artists such as Amedeo Modigliani and Pablo Picasso. He wrote about two dozens of theatre plays.

He directed six films, wrote seven films, wrote dialogues in five films, and acted in four films. His most famous directorial efforts are Beauty and the Beast (1946) and Orpheus (1950), both starring his longtime muse and lover Jean Marais.

He was also famous for his distinctive graphic style of side view faces, which he showcased in a number of drawings, engravings, painted ceramics, book covers and theatre posters. Those art works also included the stained glass of the Metz Cathedral and a Marianne note a woman symbolizing the French Republic postage stamp. He also drew a number of gay erotic/pornographic illustrations.

Cocteau passed away on October 11, 1963, a few hours after his friend Édith Piaf (who died on October 10). Some have attributed it to a heart attack after learning of Piaf's passing, but people close to him like Jean Marais noted he suffered from a pulmonary edema and that his heart couldn't stand it anymore.