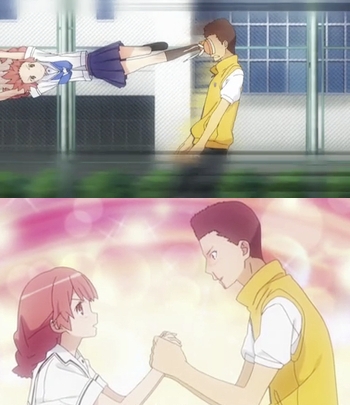 Ah, true love's... kick?!
"Yusa Chiemi! That spin kick you gave me… Hit me in the right spot! Go out with me, please!"
— Hirata, Jun'ai Tokkou Taichou
Advertisement:

They say you never get a second chance to make a first impression, but if that first impression involves you insulting, smacking or punching anyone with an arrogant personality, then you'd best watch out. You may have just made yourself a cruel and brutal enemy…

...and if they don't become your enemy, they may become something even worse.

Yes, that's right. The snobbishly Bishōnen Student Council President, the hulking school bully, the stuck-up Alpha Bitch—admire them, grovel before them, and they'll barely take any notice of you. Make a snide, cutting remark about their attitude or launch your foot into their face, and they'll be putty in your hands. It is not known why people with Jerkass tendencies tend to go gaga over the people who stand up to them — maybe because it is so rare for someone to stand up to them, and when someone does they don't just become worthy of respect, but often the only ones they are able to perceive as an equal partner.

The hero or heroine who puts the bully into their place very rarely appreciates his or her amorous attentions. This is because bullies are usually villains, and villains tend to have a rather perverted and/or amoral approach to most aspects of their lives, including love. Bully Love tends to be a rather obsessive and one-sided affair, which can be played for comedy if the object of their affections is equally strong and aggressive (and if they're not, the whole thing can just come off as damn creepy). Some heroes find themselves completely flustered by a bully's attentions, especially if the bully is female and the hero is a male who has qualms about hitting women. An aggressive heroine with no such qualms against violence may likewise find it hard to launch into a bully who is less physically strong than she is—and even if he's a gigantic brute, the heroine may find herself feeling just a little bit guilty about tossing him into a wall if he's approaching her with hearts in his eyes and a bouquet of flowers in his arms.

Occasionally, the bully may try to reform in an effort to win the heart of his beloved. In series where Status Quo Is God, this oftentimes will not go very well. If the villain becomes pathetic enough in his or her endeavors, the hero/heroine may start to love them out of pity. This can lead to a Slap-Slap-Kiss type of situation wherein the protagonist and the bully enter into a period of bickering which may eventually bear fruit when they graduate to Belligerent Sexual Tension. Death might be preferable.

In a number of situations, it is a form of Meet Cute — haloed in light and slightly out of focus, she's the first thing you see upon waking up from the horrific beatdown she just inflicted upon you. What better way to meet the love of your life?

The stronger version of Defeat Means Friendship, and the lighter version of You Got Spunk!. This is very likely to overlap heavily with I Love You Because I Can't Control You and may be a sign of an Amazon Chaser. See also Well, Excuse Me, Princess!, In Love with Your Carnage, Dating Catwoman, and The Love Slap of Epiphany. Contrast Best Her to Bed Her, where the defeated is bound by vow/law etc to marry the victor regardless of their feelings; they may overlap.

Not to be confused with the Chinese drama Love at First Fight.