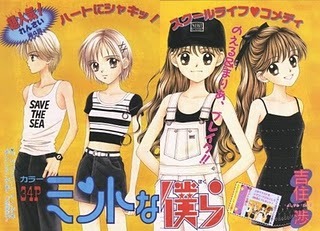 Noel Minamino has a sister complex, and does not take it well when his twin sister Maria transfers to a boarding school to pursue a boy. Noel promptly decides to go after her, and is not stopped by trivialities such as the only free space being in the girls' dorms. After all, it only takes the right wig for him to very convincingly pass for Maria's twin "sister". Hilarity Ensues, of course.

The story follows Noel as he struggles with his life as a girl, befriends the popular Ryuiji Sasa and tries to figure out the mysteries of his roomate Miyu Makimura. Meanwhile, Maria is struggling with her love life. Created by Wataru Yoshizumi of Marmalade Boy fame. It was serialized in Ribon from July 1997 to February 2000.