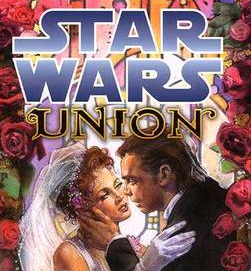 And it was completely drama free...

Star Wars: Union is a four-issue comic book series written by Michael Stackpole and illustrated by Robert Teranishi, set in the Star Wars Legends, taking place shortly after the Hand of Thrawn duology.

The impossible has, in fact, occurred: the Imperial Remnant and the New Republic have signed a peace treaty. Wait, sorry, that's not the impossible part. This is: Luke Skywalker proposed to Mara Jade.

It's Wedding of the Century time.

And not everybody's happy about it. The press starts spinning scenarios about "a Jedi power-base to establish a Force Empire," the plans for a small intimate wedding were scuttled the moment Threepio got involved, Mara can't find a dress, she and Luke are both having Past Experience Nightmares, and a splinter cell of Imperials figures this is the time to strike...

C'mon. Did anybody really think this was going to go smoothly?

In addition to the inherent Star Wars character and universe tropes, this series provides examples of: