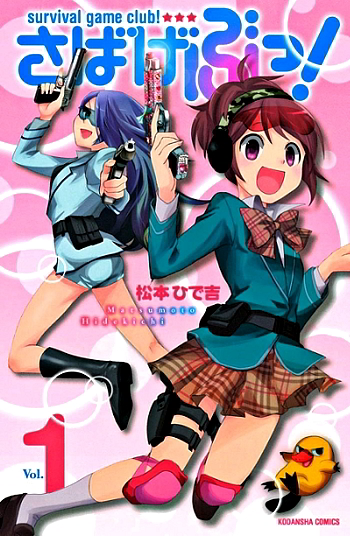 Momoka Sonokawa is taking the train on her first day at a new high school, when she is molested by an old pervert. Luckily she gets help in the guise of an imposing older student... who happens to be carrying what looks like a Desert Eagle, the biggest handgun on the market. It turns out that this is Miou Ootori, who is her upperclassman and the president of the school's airsoft club, and her twin holstered pistols are airsoft guns.

The club already has three other girls... and a walking platypus. After a series of incidents involving a booby trap, handcuffs, rappelling and spiked food, she joins the club and takes part in "Survival Games" where they shoot airsoft guns at each other.

The humour in this manga comes out of airsoft battles being drawn and animated as if they were real, parodying action films, and every member of the club being some kind of nutjob, with Momoka being perhaps the worst of the lot.

Written and drawn by Hidekichi Matsumoto, Sabagebu! (さばげぶっ!) is a comedy series serialized in Kodansha's Nakayoshi magazine from 2010 to 2016 (which technically makes it a Shoujo series, strangely enough). It has been compiled in nine volumes, and an animated adaptation produced by Pierrot+ and directed by Masahiko Ohta aired during the Summer 2014 Anime season.

Sabagebu! gives examples of the following:

The girls talk about about Yammy's "disappearance" right in front of her.

Example of:
Right in Front of Me

The girls talk about about Yammy's "disappearance" right in front of her.