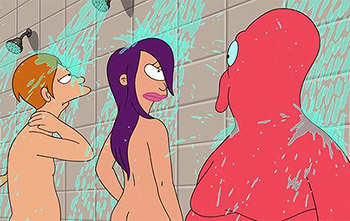 A trope so pervasive, not even other species are safe.
Tommy: How was it? I heard there was an awesome shower scene.
Harry: Oh, yeah! But then this naked girl got in and you could barely see the shower.
— 3rd Rock from the Sun, "Indickscretion"
Advertisement:

Exactly What It Says on the Tin: A character (usually someone designated a Mr. or Ms. Fanservice — either in-universe or according to the fandom — but an Innocent Fanservice Girl [or Guy] can be susceptible) takes a shower.

More often the person is female, but can also be done with men.

This can also involve more than just one person, but they are usually all within the same gender.

Also known as the Obligatory Shower Scene. A Decontamination Chamber can be used as a variation of this in science fiction works.

One of the most common forms of Fanservice, this will usually involve frosted glass, Censor Steam, Censor Suds, a Toplessness from the Back shot and a Modesty Towel before and afterwards to appease the censors, if necessary.

If a waterfall is used in place of a shower for whatever reason (a character is out in the woods or the story takes place before indoor plumbing was common), then it's a Waterfall Shower.