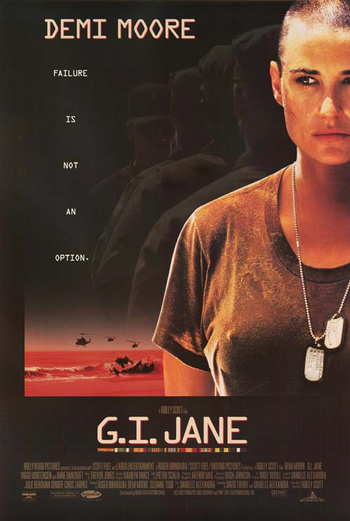 Senator Lillian DeHaven of Texas (Anne Bancroft) publicly criticizes the United States Navy for its failure to integrate both male and female recruits to all its services. She strikes a deal, arranging for a series of test cases. A single woman will join each branch currently fully-staffed by males service and try to perform as well as her male colleagues. The first test case has Lieutenant Jordan O' Neil (Moore) joining the U.S. Navy Combined Reconnaissance Team.

The Lieutenant has to contend with the brutal training regime of Command Master Chief John James Urgayle (Mortensen), trumped up charges of being a lesbian (violating the "Don't ask, don't tell" policy), attempts to relegate her to desk jobs, and double-crossing allies. Her graduation test involves an actual operation in the Libyan Desert.

Not to confuse with G.I. Joe.