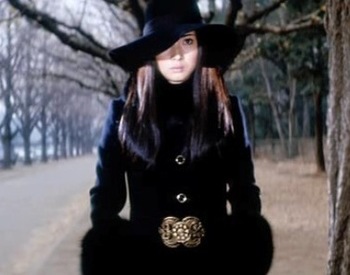 The Female Prisoner Scorpion (Japanese: Joshuu Sasori) series are women in prison films (surprise!) from Japan's Toei Studio. The first was director Shunya Itou's debut in 1972, and he also directed the second and third; the first four star Meiko Kaji in the title role. Several different lead actresses, reboots and plotlines, not necessarily anything to do with each other, followed her departure. They originate from a manga series begun in 1970 by Touru Shinohara.

The series centres around Nami 'Matsu' Matsushima, prisoner number 701, also known by the inmates as Sasori — Scorpion. Seduced, horribly used and casually betrayed by Sugimi, her corrupt detective boyfriend, she is imprisoned for trying and failing to kill him. Her story revolves around her determination to escape in order to get her revenge, and the increasingly large web of bitter feuds and grievances this creates, inside the prison and beyond.