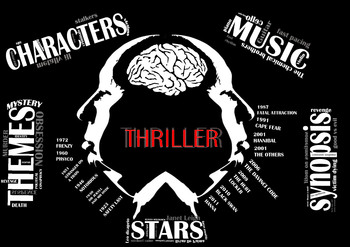 "No mere mortal can resist... the e-vil of the Thriller!"
— Vincent Price, Michael Jackson's "Thriller"

A thriller is a genre in visual media and literature which focuses on action, fast pacing, tension, and suspense. The conflicts are usually between desperate heroes and powerful antagonists who outmatch them by a large margin. Frequent location changes, time shortage, and Cliffhangers are extremely common.

Thrillers can overlap with almost any other genre. They are more defined by their plot and devices than by their content. They can be identified by the thrills the work gives to the reader or viewer.

Modern incarnations of Thrillers seem to overlap more and more often with the Horror and Science Fiction genres, leading to a misclassification of all Thrillers as being Horror, Science Fiction, or both.

Tropes often associated with the genre