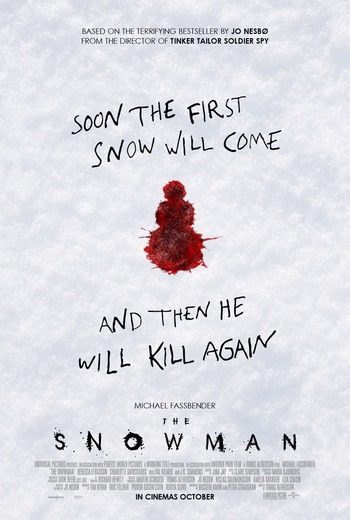 Mister Police. You could have saved her. I gave you all the clues.
Advertisement:

The Snowman is a crime horror/thriller film directed by Tomas Alfredson. It is an adaptation of the Harry Hole novel of the same name by Jo Nesbø, and it stars Michael Fassbender, Rebecca Ferguson, J. K. Simmons, Charlotte Gainsbourg and Val Kilmer.

When Detective Harry Hole (Fassbender) investigates the disappearance of a woman in the first snow of winter, he fears that a serial killer who has been unapprehended for similar past murders has returned. With the help of Katrine Bratt (Ferguson), Harry must connect the past cases to the present case and outwit the killer before the next snowfall.

Not to be confused with the heartwarming Graphic Novel The Snowman or its animated adaptation.

The Snowman contains examples of: