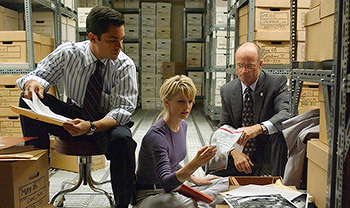 A cold case is a criminal investigation that has been rendered inactive and unsolved due to a lack of evidence, witnesses, or suspects to form a solid lead. When new evidence does show up or new technology allows for better examination of old evidence, it's a long, difficult, and painful process to peel back the layers of dust covering it and try to put the new lead into context with what's already known about the case, and where that may lead, no one knows.

There are several TV series that revolve around the solving of cold cases. The reopening of an old case may also be used as a one-time plot in a series that usually focuses on fresh investigations. If it's an old case that the protagonist worked on when it was still fresh, this can overlap with That One Case and My Greatest Second Chance.

In Real Life, the statute of limitations impose a limit on this: after a certain time period a case goes officially cold and no legal actions can be initiated anymore. There are practical reasons for this (evidence may be lost or compromised, witnesses may not remember details all that well anymore, and bureaucracy would be a nightmare if dead-end cases remained open indefinitely), and the specific period depends on the local laws. It also depends on the crime committed, with the gravest ones likely having no such limits. The plots may deal with this in three ways. First, to simply ignore it: all that it takes is the protagonists being willing to do it. Second, use it as a time limit: the statute of limitations will be reached tomorrow at 0:00, so we have just one day to solve the old case. And third, the case may have already reached it, the protagonist investigates it just for the heck of it, but then the evidence reveals that there was a higher crime committed: one with no statute of limitations, or that is still within time to initiate legal actions. That, or the criminal turns out to be someone from the cast or someone the investigator knows; so that there can be drama even if the case stays closed despite the investigation.

Supertrope of Extremely Cold Case, where a detective applies their crime-solving skills to a historical mystery so old everybody involved is long dead.