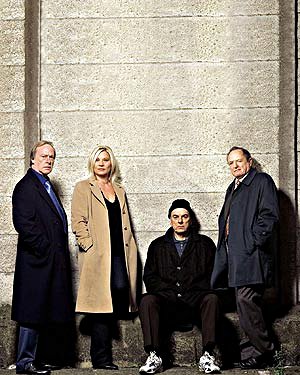 It's all right, it's okay. Doesn't really matter if you're old and grey.
"You shoot one dog in this country..."
— Detective Superintendent Sandra Pullman
Advertisement:

New Tricks (2003-2015) is a BBC crime comedy/drama about the investigations of the Metropolitan Police's (fictional) Unsolved Crimes and Open Cases Squad (UCOS). Although mostly a Mystery of the Week Police Procedural, it also combines a hint of Amateur Sleuth in that most of the members of the squad are actually retired policemen employed to investigate unsolved crimes. The only serving police officer on the squad is the boss, Detective Superintendent Sandra Pullman (Amanda Redman), an uptight, tough-as-nails investigator. Her previously high-flying career came crashing down to earth through an unfortunate dog-shooting incident, resulting in her reluctant appointment to the newly created UCOS. Faced with an unappealing selection of job applicants, she recruited:

In the course of of Series 9 (2012), Jack was Put on a Bus and replaced with DI Steve McAndrew, played by Denis Lawson (AKA Wedge Antilles), a Fish out of Water retired detective from Glasgow who originally came down to help with a case relevant to his past. In series 10 (2013) there was an even greater cast change, with Brian being replaced by DCI Dan Griffin (Nicholas Lyndhurst) and Sandra being replaced by DCI Sasha Miller (Tamzin Outhwaite). Gerry left the show in 2015, to be replaced by Ted Case (Larry Lamb).

Although a mystery series, much of the interest in the show comes from the characters and their various eccentricities, and in particular the culture clash between modern police methods (represented by Pullman and her media-and-statistics conscious superiors) and the old-school ways (Halford, Lane and Standing are all cops from the seventies and eighties). Pullman is often exasperated by the corners cut and rules ignored by her colleagues, even as she herself is gradually 'corrupted' by them. In some ways, it can be said to foreshadow the popularity of Life On Mars, only instead of the boringly squeaky-clean modern copper being sent to the past to be 'corrupted' by it, the past's veteran coppers return in the present.

This is also a seriously popular show - repeats have been known to get eight million or more viewers, and they can be found pretty often at that. However, the ratings did eventually decline, leading the BBC to announce that Series 12 would be the last.