There Will Be Toilet Paper 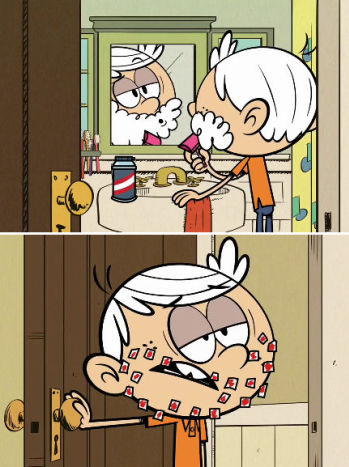 "Look at that hackjob!"
Men seem to cut themselves a lot while shaving on screen, possibly more often than happens in real life.
Advertisement:

If they cut themselves shaving, it's either the set-up for a gag, or to contribute in some way to Character Development. And if there is blood, There Will Be Toilet Paper - typically applied to the cuts in tiny ripped squares. Sometimes the shaving scene is cut and we skip directly to a shot of the man with bits of toilet paper stuck to his face with dried blood. Expect the Deadpan Snarker to snidely comment on the character's poor shaving job.

If the cut is for comedy, he will usually forget about the toilet paper and go through at least some part of his daily routine with toilet paper stuck on his face. If it's for Character Development, he'll be more likely to remove it.

For added humor, include after-shave in the equation, for screams of pain as the alcohol hits the open cut.

See also Cut Himself Shaving (when he didn't really) and Dangerously Close Shave (when the wound will need a lot more than toilet paper). Not to be confused with a Toilet Paper Trail or Toilet Paper Prank.