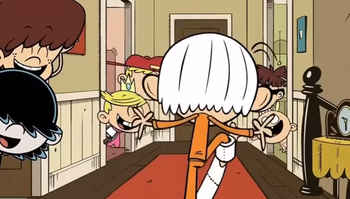 "Hey, dork! You've got toilet paper stuck to your shoe!"
— Bar patron responding to Larry, Leisure Suit Larry 1: In the Land of the Lounge Lizards
Advertisement:

A classic form of Toilet Humour: Somebody leaves the bathroom (often spending a lot of time in there) and a sheet of toilet paper is stuck to their foot. This is highly embarrassing, especially if someone points it out.

A variant also involves a woman (usually a woman) who leaves the bathroom with a length of toilet paper trailing from under her skirt. Another variant has a character getting wrapped up in the toilet paper trail, looking like a mummy.

Not to be confused with There Will Be Toilet Paper. For other non-bathroom appearances of toilet paper, see Toilet Paper Prank.