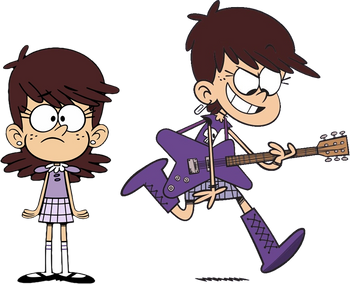 Luna Loud, from shy Girly Girl to energetic rocker.
The inversion of Girliness Upgrade and Used to Be a Tomboy, this trope happens when a heroine starts off as conventionally feminine but, as time goes on, gains more masculine interests or starts dressing in a slightly boyish (or less girly) manner.
Advertisement:

This may also be because the parents Wanted a Gender-Conforming Child and influenced the girl to be feminine in childhood. Once they grew up, they found their own (tomboyish) ways of expressing themselves.

It may overlap with Took a Level in Badass, but not necessarily. Compare Xenafication when a female character becomes an Action Girl in an adaptation, or Adrenaline Makeover when a shy girl evolves into a cool and adventurous character.