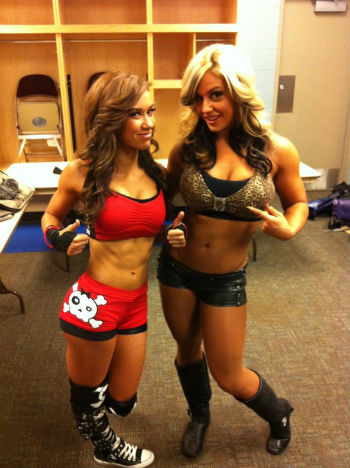 The duo were previously contestants on the all-women/third season of WWE NXT (September 7, 2010 - November 30, 2010), AJ coming in third and Kaitlyn winning the competition. At the start of the season they were initially at odds but after Kaitlyn's Heel–Face Turn, their Real Life friendship started to show on-screen. When AJ joined the main roster on May 27, 2011, the two of them were paired to become an official tag team that same day. They officially broke up on May 13, 2012, with the break-up having to do with Daniel Bryan's ended his romance with AJ, and how it ended, and Bryan considering "other" options (see Hope Spot below).

on the 20 year anniversary of Raw on January 14 2013, when she beat Eve Torres for the title. She would later drop the title to her former partner on June 16th of that year.

Tropes associated with the Chick Busters include: