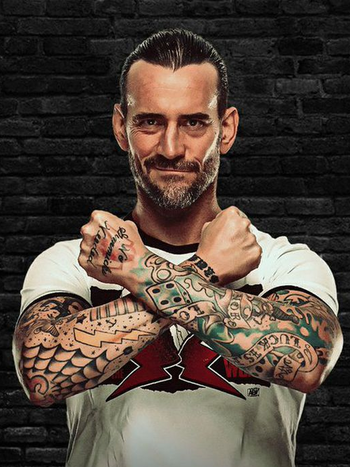 Look in my eyes, what do you see?
"I have no breaking point, and all you have to do is look in my eyes and realize I have laughed in the face of temptation time and time again. I have never tapped out to society's attempts at peer pressure. You try to stick a beer in my hand with the same commercials that have hypnotized all of you people, and that sell you all your narcotics and things you're addicted to. Well, I'm harder than any alcohol you can drink, I'm straighter than any line you can snort up your nose, and I certainly can hurt you a lot faster than any pill you put on your tongue."
—CM Punk, WWE SmackDown, September 11, 2009

He began as a backyard wrestler who gave up the hobby in 1999 in order to train in the Steel Dominion Wrestling school of Chicago, Illinois under established professional wrestlers Ace Steel, Danny Dominion and Kevin Quinn. Punk went on to win the Steel Domain Television championship and would then give back to professional wrestling by becoming a trainer himself for Steel Domain and Primetime Wrestling. His work as a trainer got him hired by the ROH Academy, which he became the first head trainer of.

Between this time, CM Punk spent the years working for various Independent Wrestling Association affiliates (particularly Mid-South), National Wrestling Alliance territories such as Pro Wrestling ZERO1 and other promotions across the globe - his most notable work being in Ring of Honor and World Wrestling Entertainment. He set himself apart from his fellow wrestlers during this time with his character being outspoken, confrontational and anti-establishment with a tongue of unparalleled sharpness on the mic, but most of all carrying a "Straight Edge" gimmick (based on his actual lifestyle).

The gimmick consisted of him flaunting his Straight Edge lifestyle to other wrestlers, which led to him heading a growing faction in WWE called the Straight Edge Society, which promised to "save" people from their self-destructive lifestyles by helping them embrace Straight Edge principles and beliefs. He emphasized different aspects of the lifestyle to garner the intended audience reaction based on whether he was a face or a heel. As a face, his character was pretty much indistinguishable from his real-life personality. As a heel, he would lean into the elitist mindset of a hardline or militant straight edge, regularly claiming during promos that because he was Straight Edge, he was "better than you!"

However, his rise to WWE superstardom came in the year of 2011, namely during the summer of that year, which has since been dubbed the "Summer of Punk"note also a name given to the summer of 2005, wherein Punk had a heel storyline as part of Ring of Honor shortly after accepting a deal with WWE, where he threatened to bring his ROH championship to WWE. On the June 27th Raw, he dropped his first (and most acclaimed) Worked Shoot on Vince McMahon, which would come to be known as a "Pipe Bomb"note "Pipe bomb" referred to CM Punk's microphone, and he had been calling them that years before WWE, but people started calling his promos pipe bombs instead for whatever reason. Then, after the Money in the Bank PPV on July 17th, he became one of the very few men to walk out on WWE still holding the WWE Championship. After his return and regaining the belt, he held the title for 434 days, becoming the longest reigning WWE Champion of the Modern Era.

On January 27, 2014, the night after that year's Royal Rumble, Punk walked out on WWE and officially retired from professional wrestling as of May 29

. On November 26 of that year, Punk would later appear on the Art of Wrestling podcast with longtime friend Colt Cabana to explain the reasons and ongoing factors that led to his departure

, which included a number of Creative Differences and backstage tensionnote including being paid less than other wrestlers for no explained reasons, doing unreciprocated favors for Vince McMahon, feeling that John Cena was the only person given a clear long-term plan, and the fact that he never main-evented a WrestleMania, which he considers his greatest failure as well as accumulating averse effects on his healthnote his final months in WWE were spent working through several concussions, broken ribs, injured knees, and an untreated MRSA infection that could've killed him. However, he publicly stated that the manner in which he was fired (being FedExed his termination papers on his wedding day) was the last straw for himnote although Vince McMahon described this as an incredibly unfortunate coincidence, and between that and the extended legal fallout he went through after going public about his grievances, the whole experience solidifed that he would essentially never have a working relationship with WWE again.

As Punk had begun to dabble in MMA training following his departure, he confirmed on December 6, 2014 that he had signed a multi-fight contract with UFC, and debuted at UFC 203 on September 10, 2016. He was released following two consecutive losses, after which he began working as a commentator with Cage Fury Fighting Championships (CFFC). He made a surprise return to the wrestling world

on November 12th, 2019 by appearing at the very end of an episode of FOX's WWE Backstagenote It's an important distinction that Punk was employed by FOX at this time, not WWE, which he later joined as a special contributor and analyst.

In the time that he spent away from wrestling, Punk's stance on returning in any capacity, let alone entering the ring again — one of his most routinely asked questions — shifted back and forth between "under the right set of circumstances" and "never in a million years". However, the summer of 2021 saw intense speculation in the wrestling world that claimed Punk was not only gearing up for a return, but that it would happen under AEW. Due to a number of factors, including a great deal of subtle teases from AEW's executives and wrestlers alike, the company would end up generating so much hype without explicitly confirming Punk's signing that its second episode of Rampage and its All Out pay-per-view — both held in the Chicagoland areanote Rampage in Chicago proper, All Out in Hoffman Estates — sold out almost immediately. Sure enough, it was on August 20, 2021, during the Rampage episode, that CM Punk would make his official return to professional wrestling after seven yearsnote 2,763 days, but who's counting? by debuting in AEW. The moment must truly be seen to be believed (1

In addition to professional wrestling, Punk has also dabbled in writing comic books, most notably penning a story in Thor Annual #1 and a Drax ongoing series at Marvel Comics. He's also been building an acting career since the late 2010s, landing several supporting roles (a remake of Rabid, Jakob's Wife) as well as a film starring role (The Girl on the Third Floor), and another supporting role in the Starz series Heels.

"The Best Tropes in the World:"