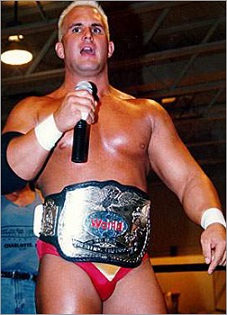 Christopher Barrett Candito (March 21, 1972 – April 28, 2005) was an American Professional Wrestler from Spring Lake, New Jersey under the name Chris Candido. He started his career as a teenager, training under his grandfather Chuck "Popeye" Richards, working for "Pretty Boy" Larry Sharpe's World Wrestling Association in New Jersey, It was during this time that he met and fell in love with Tammy Lynn Sytch, who would be both his onscreen valet/manager and Real Life girlfriend and later wife. Candido first got noticed while wrestling in NWA Eastern Championship Wrestling as a member of the Tag Team the Suicide Blondes, who would have two runs with the NWA ECW Tag Team Titles

until Candido left the promotion. He then turned up in Jim Cornette's SMW, which is where Sytch, under the name "Tammy Fytch", made her television debut. Candido would go on to hold every title in SMW and also won the NWA World Heavyweight Title

. In 1995, Candido and Sytch arrived in WWE as the Bodydonnas, Skip and Sunny, doing an evil fitness trainers gimmick. Sunny would lead Skip and Zip (Dr. Tom Prichard) to the WWE World Tag Team Titles

in 1996 before the team broke up in the fall and Candido returned to ECW. While there, he and Lance Storm would win a Three-Way-Dance for the ECW World Tag Team Titles over the Champs Doug Furnas and Phil LaFon and Balls Mahoney and Axl Rotten. After losing the belts to Sabu and Rob Van Dam, Candido and Storm would feud into late 1998 until personal issues led to Candido taking time off. He would have a feud with Taz in 1999 before he and Sytch, who had departed WWE in June 1998, left for the independents. They would spend a few months in WCW, where Candido would win the WCW World Cruiserweight Title

in Spring 2000, before leaving. He eventually turned up in TNA in 2005. Sadly, just when it seemed like he finally had his life on the right track, he would suffer ultimately fatal injuries in a cage match at the TNA Lockdown PPV, and complications from the surgery led to his death on April 28th.

"These are No Gimmick Needed Tropes":