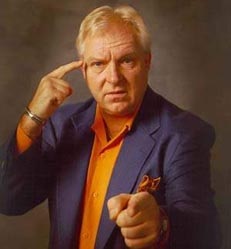 The Brain
"A friend in need is a pest."
Advertisement:

Raymond Louis Heenan (November 1, 1944 – September 17, 2017), better known as Bobby "The Brain" Heenan was one of Professional Wrestling's most famous managers (and possibly the most successful), working throughout WWE's "Federation Years" of the '80s and '90s as the manager of many a great wrestler and tag team, often running his collective of wrestlers under the name of "The Heenan Family". The Family was constantly opposed by Hulk Hogan, and many of the wrestlers Heenan managed met with bitter defeat at Hogan's hands, despite Heenan's efforts to tilt the odds in their favor.

Aside from his managerial duties, Heenan was also a color commentator; he was one-half of (arguably) the greatest commentary duo in the history of the industry (with the late Gorilla Monsoon), and he also worked for WCW for a number of years. He was inducted into the WWE Hall of Fame in 2004.

"Read my tropes, you humanoids":