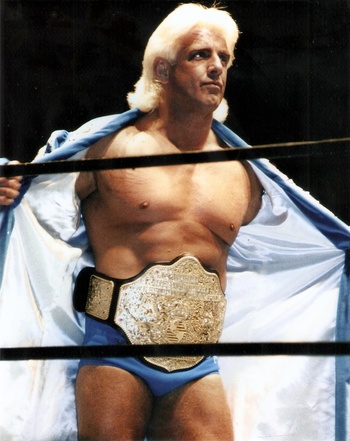 "To be the Man, you've
got to beat the Man."
"If wrestling can be considered an art form, then he is using oils, and the many others merely water colors."
— Jim Ross, Starrcade 1988

In the world of pro wrestling, there are superstars, there are legends... and then there's Ric Flair (known since infancy as Richard Morgan Fliehr; born February 25, 1949note Flair was adopted in infancy through an agency that, unknown to its clients, obtained children by means ranging from shady to outright illegal. He does not definitively know his actual birth name.). With a career spanning four decades, 22 World Heavyweight Title reigns across three companies, legendary matches and feuds with some of the biggest names in the business, and a retirement sendoff which will never be duplicated in scope or emotional impact on fans, Flair is one of the most famous wrestlers who has ever lived, and the NWA equivalent of The Rock or Hulk Hogan.

He was leader of The Four Horsemen, and the voice of Evolution. He put Dusty Rhodes and his family through "hard times, daddy!" He worked in the AWA, NWA, and WCW, then joined WWE, all following a Should-Have-Been-Career-Ending plane crash (which he miraculously survived). He is the first man to be inducted into the WWE Hall of Fame not once, but twice! He is the last-surviving star of the old school era, and has stayed relevant in the modern era. He's the reason behind the "Wooo!" chants every time a wrestler chops someone. He has truly done it all.

"Whether you like them or whether you don't, learn to love 'em, because they're the best tropes going today. Woo!":