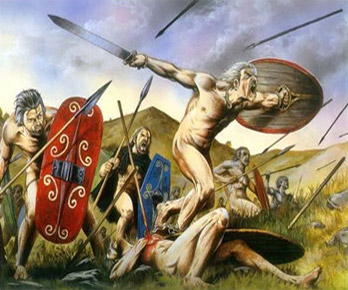 The Emperor's Nude Army.note Image by Wayne Reynolds.
Dr. Venture: Why are you naked?
Brock: To prey on their fear, to move like an animal, to feel the kill!
— The Venture Bros.
Advertisement:

When Armor Is Useless, it makes sense not to wear any. But why stop there? Why wear anything into battle? Anyone can be tough in Powered Armor, but it takes either a really badass hero or a really depraved villain to fight in the nude.

The motivation for this tends to be different for heroes and villains. For villains, it's usually done for creepiness; instead of being silly or titillating it comes off as really, really scary. The nudity emphasizes brutality and aggression instead of being sexy. It can also indicate that the villain doesn't care at all what people think about them. They left normal human motivations, like modesty and shame, behind them, or maybe they have an Übermensch-complex. Or, very creepy indeed, that bloodshed turns them on.

Naked heroes generally don't really have a motivation because they generally don't choose to do it; when a good guy fights in the nude it's usually out of necessity, from their clothes being stolen or destroyed. This is why a naked hero tends to come off as badass, whereas a naked villain usually comes off as insane. If they are both badass and insane, this might be more Success Through Insanity for them. Bonus points if they combine this with This Means War Paint.

For both alignments, nakedness can be associated with innocence and nature. The hero may be one with nature, whereas the villain isn't really human, more like a predatory animal or a natural disaster (see the fifth variant of True Neutral).

Another part is that it seems reckless to go naked in the face of carnage or combat. It implies that the character is so powerful that they don't need armor, or just don't care about defense.

The Logical Extreme of Walking Shirtless Scene (male) and Chainmail Bikini (female). Contrast Panty Fighter for a downplayed version. If they have no weapons and no clothes, it's a No-Gear Level. See also Evil Is Sexy for villains who wear just enough...

When someone does this, it's a good sign that they might be a Shameless Fanservice Girl. Not to be confused with military frontal assault, Informed Equipment (the trope formerly known as Fight in the Nude), and the "Ratchet and Clank" game.

Example of:
Please Put Some Clothes On