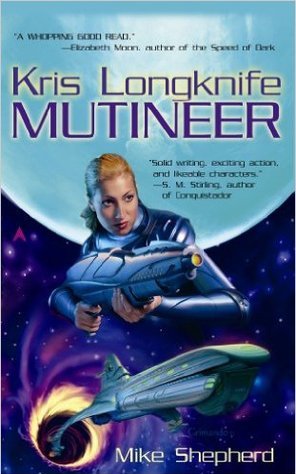 Jack: I see they didn't hang you.
Kris: Nope, they missed their chance. The Navy still has a Longknife.
Jack: Why do I feel like saying 'God help us all'?
Kris: 'Cause it just may be true.
— Mutineer, by Mike Shepherd
Advertisement:

A Military Science Fiction/Space Opera novel franchise primarily centered on Kris Longknife, a rich young naval officer who struggles to deal with the expectation and reputations (both good and bad) of a famous family of military leaders, politicians, and billionaires, written by American author Mike Shepherd (a pen name for Mike Moscoe). The franchise is sometimes referred to as the "Jump Point Universe".

Books in the main series:

In addition, there are several associated ebooks, both novellas and short stories:

There is also a spinoff series centered around a secondary character:

And another series of ebooks picking up in the Alwa system after Kris left and was replaced by Sandy Santiago:

And a prequel series about the Iteeche War, starring Kris's great-grandmother Rita Nuu-Longknife:

Mike Moscoe earlier wrote a series in the same continuity under his own name:

The first three books are currently out of print, though they were republished in 2013.