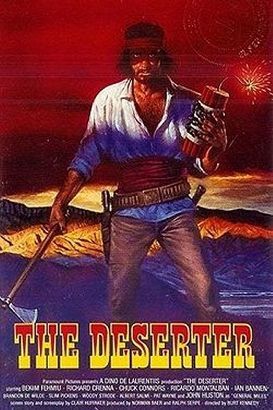 "In truth, the man was an oathbreaker, a deserter from the Night's Watch. No man is more dangerous. The deserter knows his life is forfeit if he is taken, so he will not flinch from any crime, no matter how vile."
— Eddard Stark, A Game of Thrones
Advertisement:

Many people take a dim view of abandoning a military post. Even works that disapprove of warfare on general principles won't approve if it took place "in the heat" of battle (thus leaving more loyal soldiers hanging). So those who say Screw This, I'm Outta Here! to a legitimate group tend to be bad people.

The problem is not just their dishonorable abandonment. The real problem is their now-desperate situation. Desertion is usually punishable by death, so these people have no more incentive to refrain from other capital offenses, like murder, and every reason to engage in them if they think you'll turn them in. They also tend to be armed. They tend to steal what they need from the surrounding countryside. And they can't just settle down, lest they be caught. They may try to pass themselves off as War Refugees, too.

There are sympathetic deserters out there, usually having left a villain's army which they had no choice about joining in the first place (and the degree of sympathy that they can get often depends on how willingly they went to war) but this trope is not about those people. The Dangerous Deserter is hardened, desperate, and, well, dangerous. And many if not most of them were hardened enough Sociopathic Soldiers for their part in the war and only fled once the tide started turning against them.

Contrast Rebellious Rebel. Criminals who are determined to Never Go Back To Prison may have a similar level of dangerous desperation to them. Compare and contrast From Camouflage to Criminal, where regardless of the circumstances under which someone left the military, they use their military skills in a life of crime.