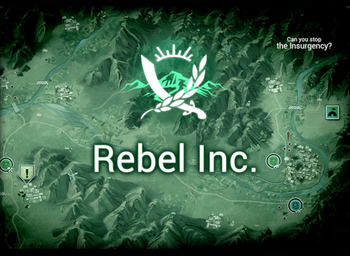 Will you bring peace and hope, or see this war-torn country descend into violence once more?
Rebel Inc. is a 2018 iOS game from the developers of the highly acclaimed game Plague Inc., Ndemic Creations. An Updated Re-release titled Rebel Inc.: Escalation launched on October 15th, 2019 for PC as well. While Rebel Inc. is visually similar to Plague Inc., the gameplay differs significantly.
Advertisement:

The game takes place in the aftermath of an international invasion of a unnamed but thematically Central Asian countrynote A lawyer-friendly version of Afghanistan with a lesser extent to Iraq. With the fighting in the chosen region over, the player is assigned as the governor of that area. The goal of each mission is to develop and stabilize all the zones of that region, while dealing with insurgents and keeping your reputation from dropping to zero.