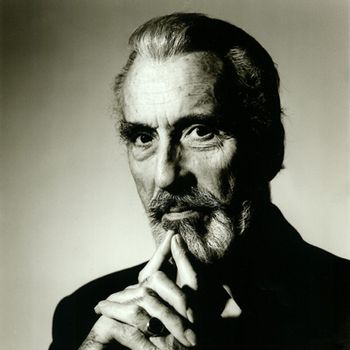 "Wait, I think I can hear Peter Cushing."
"I never thought of him as a vampire, ever. That's one thing you have to bear in mind. And it is for all of us, isn't it? Here's a man who is immortal. Here is a man who, through being immortal, is a lost soul. Here is a man who experiences the loneliness of evil, something he can't control, who wants to die but there is a force in him, a malefic force, which drives him to do these terrible things. I said earlier the character is heroic, based on the real man — a war leader and a national hero, I may say, in Romania to this day — Vlad the Impaler. Certainly a bloodthirsty character, without a doubt. I also told you that the character is romantic — so he is, as far as women are concerned, and erotic. And there's, of course, the obvious association with the bite in a sexual sense, if you like. So I tried to put all those particular characteristics into the character. It appears that I succeeded."
Advertisement:

Sir Christopher Frank Carandini Lee, CBE, CStJ, (May 27, 1922 - June 7, 2015) was a veteran Belgravia, London-born British actor who initially made his name playing villains - most famously Count Dracula in Hammer Horror films (although he was a hero in The Devil Rides Out). He became well known for his horror work, and was good friends with Vincent Price and Peter Cushing, and the three were known as the "Unholy Trinity of Horror" for a while. During the 1970s, he also played Lord Summerisle in The Wicker Man and Francisco Scaramanga in the film version of one of his cousin (and war buddy, but more on that later) Ian Fleming's books, The Man with the Golden Gun. He even played a leader of a gang of gay bikers in the satire on American life Serial. His piercing eyes and melodious bass voice made him instantly recognizable. See Compelling Voice.

Although he never stopped acting, famous roles dried up a little during the 1980s and 1990s, until he returned with a vengeance, playing villains again, in two of the most widely-seen movie series of the new century: Count Dooku in the Star Wars Prequel Trilogy and Saruman the White in The Lord of the Rings. He was the only member of the Lord of the Rings cast to have met J. R. R. Tolkien in person and was an avid scholar of Tolkien's work (he apparently read the entirety of it once every year), often advising Jackson and Boyens on some of the finer points of the backstory. He wanted to play the role of Gandalf but he felt he was too old for the role when films got around to being made. He has also had a cameo as a member of the church hierarchy in The Golden Compass, so that particular character would probably have turned out to be important had the sequels not been canned.

During World War II, Lee served with the Royal Air Force and intelligence service, and has mentioned in the past that he also served with Special Operations Executive (otherwise known as The Ministry of Ungentlemanly Warfare), although always declined to give specific details. The SOE was set up by Churchill to "set Europe ablaze", and it included - among others - Christopher Lee, Jon Pertwee (the famously gadget obsessed Third Doctor) and Ian Fleming, making it the obvious inspiration for the James Bond series. So there's a good reason that Lee was cast in one of the film versions. After the War, he also became a Nazi Hunter, hunting down War Criminals due to being fluent in both French and German.

During the filming of The Lord of the Rings, he disagreed with Peter Jackson over certain aspects of his character's death scene, insinuating that he knew first-hand the sound a man makes when he's stabbed in the back (see Reality Is Unrealistic). Take that as you will.

While known primarily as an actor, Lee also trained as an operatic bass-baritone singer

you just can't make up.

He came out with a metal album

, called Charlemagne: By the Sword and the Cross. (This had some personal significance for Lee: through his mother — an Italian countess — he could trace his ancestry to Charlemagne himself.) Oh, and he head-banged

. The veteran actor said he often threw himself around to heavy metal. ‘I do head-banging every day,’ he said. ‘Exercising my neck muscles is good for my back. I can do it with or without music.' By the Sword and the Cross has a follow up called Charlemagne: The Omens of Death, with a preview released on on May 27, 2012 (Sir Christopher's 90th birthday) and the full album was released on May 27, 2013. The release of his Charlemagne musical marked Christopher Lee as the oldest musician in the history of the metal genre. On his 92nd birthday, he released another album Metal Knight that uses metal covers of other songs to tell a story.

He shared a birthday with Vincent Price, and Peter Cushing's birthday was the day before. Pretty... spooky. He was knighted on October 31, 2009 (that's right folks, Halloween). While this does not make him more excellent per se, it was most assuredly long overdue. Everyone, please say, Sir Christopher Lee.

It is interesting to note that, despite his long and illustrious career, Lee was never even nominated for an Oscar, but that reflects more on the Academy than him. He did, however, win the 2011 BAFTA Fellowship.

He was also as of his death one of the most prolific film actors ever, having appeared in 280 different works - his last film being Angels in Notting Hill. He had been due to appear in 9/11 drama The 11th alongside Uma Thurman but it was not to be.

Lee died aged 93 on June 7, 2015 at Westminster Hospital in London, after having been admitted for respiratory problems and heart failure; his wife Birgit held back the news of his death until June 11 so that she could inform their family members privately. Upon his death, they had been married just over fifty-four years.

His HUGE body of work includes:

Count Dooku, head of state of the nascent Confederacy of Independent Systems, visits Obi-Wan Kenobi following his capture by the Geonosians. In an attempt to recruit him, Dooku plays on their mutual friendship with the late Qui-Gon Jinn before explaining that the Republic is now under the control of Darth Sidious, Dark Lord of the Sith, and asks Obi-Wan to switch sides and join him--without success. Note that everything Dooku says is in this clip is, in fact, literally true, though he leaves out the part where Sidious is his own Sith Master: he is in fact Darth Tyranus, current Apprentice of the Banite Sith Order.

Example of:
We Can Rule Together

Count Dooku, head of state of the nascent Confederacy of Independent Systems, visits Obi-Wan Kenobi following his capture by the Geonosians. In an attempt to recruit him, Dooku plays on their mutual friendship with the late Qui-Gon Jinn before explaining that the Republic is now under the control of Darth Sidious, Dark Lord of the Sith, and asks Obi-Wan to switch sides and join him--without success. Note that everything Dooku says is in this clip is, in fact, literally true, though he leaves out the part where Sidious is his own Sith Master: he is in fact Darth Tyranus, current Apprentice of the Banite Sith Order.