Film / Harry Potter and the Prisoner of Azkaban 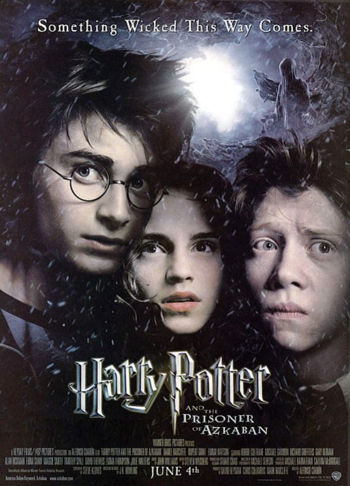 "Happiness can be found even in the darkest of times, when one only remembers to turn on the light."
Arthur Weasley: Harry, I want you to swear to me that whatever you might hear, you won't go looking for Black.
Harry: Mr. Weasley, why would I go looking for someone who wants to kill me?
Advertisement:

Harry Potter and the Prisoner of Azkaban is the third Harry Potter film, released in 2004 and directed by Alfonso Cuarón.

Sirius Black, a mass murderer believed to have been a supporter of Voldemort, has escaped from Azkaban, the wizarding prison, and is allegedly out to kill Harry. In response, the Ministry of Magic sends Dementors, a race of dreadful wraith-like creatures, to guard Hogwarts. But the Dementors are not particularly choosy about who they seek to capture or debilitate, and they seem to have an unusual attraction (and reaction) with Harry in particular.

The film's defining characteristics are its darker tone, both in terms of subject matter and cinematography, and its being the series' first distinctly pragmatic adaptation, taking a more character-driven approach that deviated from the events of the book. Both of these distinguished it noticeably from the light, faithful approach of the first two movies (both directed by Chris Columbus). While it has gone down as arguably the most controversial film in the series for this reason, it opened to significant critical success and is highly seen as an apex for the series not only in terms of quality but influence, as future films took similar risks to abandon a linear perspective in favour of more cinematic elements.

Came out one year after Harry Potter and the Order of the Phoenix hit bookshelves.

Followed by Harry Potter and the Goblet of Fire.

Harry Potter and the Prisoner of Azkaban contains examples of:

Example of:
Books That Bite