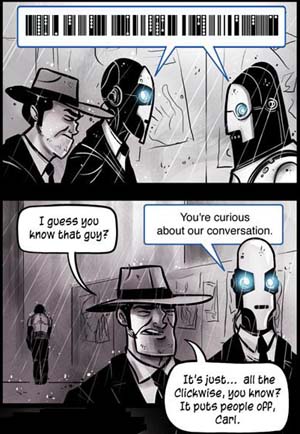 Salt and Pepper Buddy Cop Show In Cyberpunk! When there's a series of mysterious murders or crimes taking place in a cyberpunk setting, the local gumshoe is paired up with a shiny new partner with all sorts of attachments. Usually done in the form of a Wunza Plot with one or both characters overcoming prejudices/technophobia. Sometimes the human detective will say something like "I hate technology" with the android responding "I am technology".

A lot of times this leads to someone asking What Measure Is a Non-Human?

Compare Cop and Scientist. A specific form of Fantastic Noir.

Alternative Title(s): A Cop And His Robot