Film / Harry Potter and the Goblet of Fire 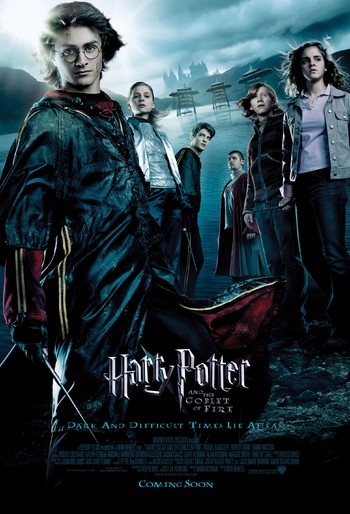 "I have no idea who put your name in that goblet, Harry, but whoever did is not a friend to you. People die in this tournament."
"Well, now that we're all settled in and sorted, I'd like to make an announcement. This castle will not only be your home this year but home to some very special guests as well. You see, Hogwarts has been chosen to host a legendary event: The Triwizard Tournament!"
— Dumbledore
Advertisement:

Harry Potter and the Goblet of Fire is the fourth film in the Harry Potter series, directed by Mike Newell and released in 2005.

Following the events of Harry Potter and the Prisoner of Azkaban, Voldemort now has a loyal follower by his side and is making plans to become stronger and regain his body. Meanwhile, Hogwarts is hosting the Triwizard Tournament between three Wizarding schools in Europe, and Harry discovers that he has been selected to compete, even though he is below the age restriction and did not apply as a candidate.

The film marked the big screen debut of Robert Pattinson (Cedric Diggory), who a few years later shot to stardom in the Twilight series.

It's also notable for being the least faithful to the book, along with its successor, Harry Potter and the Order of the Phoenix.

Harry Potter and the Goblet of Fire contains examples of:

"Soon we must all face the choice, between what is right and what is easy. But remember this: You have friends here. You're not alone."
Feedback